The Role of the Teacher 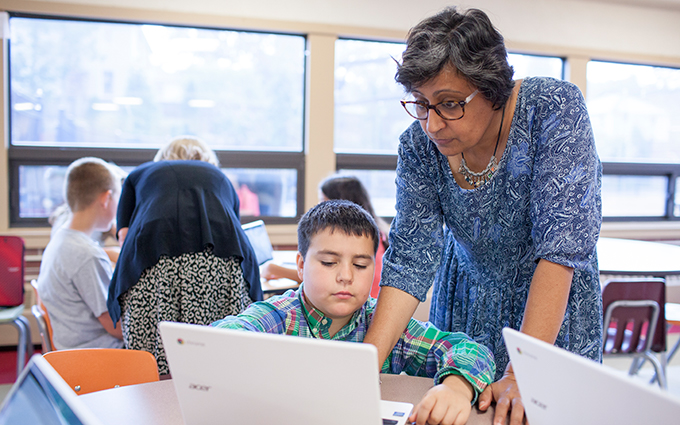 Gec Washman - Carroll’s mythological guru whose name is a loose acronym for “give each child what she or he most needs” - inspires our thinking about how to educate children. In this edition, Gec offers the parable of the role of the teacher.

Many people view themselves as knowledgeable about education. After all, almost all of us went to school. That fact informs us but it also distorts our perspectives on the teaching profession. Gec Washman’s name itself reveals a substantially different view on the role of the teacher: give each child what she or he most needs. Here is Gec’s parable to reveal the difference:

Not too long ago a precocious young child, Sammy, was in intense pursuit to recover a model boat that had crashed on the opposite shore. In fact, it was the fourth time that the simple log vessel had sailed swiftly across the pond only to crunch to a stop in about the same location on the opposite shore at the public park. An observant groundskeeper was impressed that the child had constructed the boat out of logs for the hull, twigs for the mast, and leaves for the sail. The groundskeeper praised Sammy for creativity, effort, and persistence. Sammy felt good about that… for a short while.

Yet Sammy was frustrated. Why did the boat keep heading in the same direction? Why did it meet the same sad fate on every voyage? Why did the groundskeeper think that these voyages amounted to success? To be sure, Sammy had loftier dreams for the ships. Who could help take these model boats to places where they just didn’t seem to be able to go?

Later that same day, Sammy encountered another child who was also playing with little boats that could cross the pond. Sammy’s new friend also shared the same experience that these vessels could sail OK across the pond but always went in the same direction and crashed in the same location. Together, they decided to figure out how to get these boats to take a different route. They asked anyone who passed by to help them with the challenge. Person after person told the children they were doing wonderfully, that the little boats were terrific, that they were so smart, and that there is only so much that they could expect. In fact, to many of them, it was almost a miracle that these simple little boats could sail across the pond all by themselves.

Finally, as dusk was settling in on the park, they met a wanderer who took a genuine interest in these little boats and told the children that there had to be a solution to their challenge. The stranger quoted Richard Bach by saying “there is no such thing as a problem without a gift for you in its hands.” We’ll figure this out. We can get these boats to sail to all sorts of other destinations. A little work on sail shape, a new design for a keel and rudder, or maybe a slightly different hull shape… we’ll figure out what this boat most needs.

A Crisis Shines a Bright Light on What Is Truly Important: Teachers
Steve Wilkins, Head of School Blog
Jan 27 2021

Aside from the science of controlling pandemic threats to humanity, one of the most important lessons from the past year is that schools and teachers are far, far more essential to our nation than we previously had ascribed.

Every family with school aged children is in a tough spot this fall. How to get back to school is nothing but a large basket full of hard decisions. In this blog, I write about what we share as a community as we look forward to Carroll School’s reopening.

Carroll School declares that our job is to give each child what that child most needs. It doesn’t matter whether we are forced to social distance or whether we are in person. That is our job. A remote plan that failed to focus on this principle would never work properly for the Carroll community. Steve Wilkins shares how we approach this task.