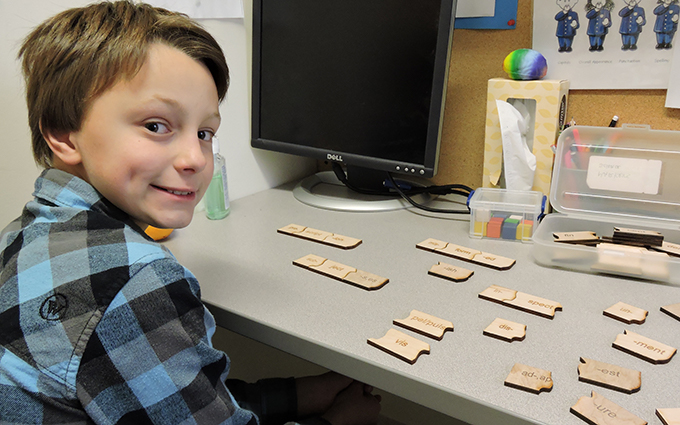 While creativity abounds across the Carroll School, its epicenter at the Middle School can be traced to one location: the Fab Lab. There, amid the woodcutter, 3-D printer, laser cutter, and computers, students harness the dyslexic advantage to bring learning to life.

Eighth graders in Liza Feldman’s writing composition course, for example, used the Fab Lab for a project called “Lasers and Poetry.” “Students learned about the different ways that authors ‘show’ rather than ‘tell’ in their writing,” Feldman explains. “One of the first ‘showing’ techniques we studied is sensory language: students practiced making their writing more descriptive by generating specific words that appeal to the five senses. This unit of study allowed for a natural transition to writing haiku, Japanese poems traditionally based on the five senses.”

After writing their poems, students worked with the laser cutter in the Fab Lab to engrave their haikus on wooden plaques. “In keeping with the class objective to ‘publish’ work, students’ projects were on display in the Storrow lobby upon completion,” she notes.

Seventh graders in Marissa Ray’s class created, wrote, and edited scripts for original Halloween-themed plays, which they then performed and produced in the Fab Lab. “The group combined two spooky stories written during a creative writing time as a guide to formulating their scripts,” Ray explains. Using the green screen and video equipment, students then filmed the movies. “That was students’ favorite part, which was mine too. It was so nice to be outside the classroom while still solidifying their writing and fluency skills,” she concludes. “And though the class will not admit it, I also think they enjoyed watching what they produced projected on the big screen. They worked extremely hard, and I am very proud of them.”

At Carroll School, we value, appreciate, and celebrate difference and strive to create a community that is safe and reflective of the rich and robust diversity of our 21st century world. In 2016, we committed to this by taking strategic action towards a Diversity, Equity and Inclusion initiative. Here are some early mile markers of our DEI journey.

Through its Targeted Cognitive Intervention (TCI) program, Carroll is building students’ cognitive capacities and harnessing data to dramatically improve student outcomes. TCI is a valuable ingredient in a comprehensive program dedicated to closing academic gaps in children with language-based learning difficulties. Here are some of the important mile markers along this journey of innovation and outcomes

Carroll’s vibrant community collaboratively pens the school’s journey story. Each student, alumnus, parent, and teacher brings a unique perspective to this shared journey and the mile markers along the way. Read The Teacher/Tutor Journey.